A start-up nonprofit and a LeadingAge member joined forces on the fly to open new horizons, via internet connectivity, for residents isolated during the pandemic.

In our overwhelmingly digital world, older adults living in affordable housing communities are increasingly in need of technology to manage day-to-day activities: communication, shopping, medical appointments, wellness activities, and more. However, too many low-income older adults lack broadband access, digital devices, and the training they might require to make the best use of technology.

This problem was thrown into stark relief by the COVID-19 pandemic, which left countless residents isolated at home and fearful of going out, even for needed medical care. A recent survey of resident service coordinators by Johns Hopkins and the American Association of Service Coordinators (AASC) demonstrated the depth of the problem: Respondents reported limited use of video calls, avoidance of needed medical care, and psychological stress caused by loneliness and anxiety among older adults.

LeadingAge-member affordable housing providers have taken a variety of approaches to help their residents. They have partnered with nonprofits, university initiatives, and foundations to do whatever it takes to upgrade internet service and put phones, tablets, and other devices into the hands of residents.

In Lakewood, OH, one LeadingAge member is helping its low-income residents by partnering with a small nonprofit founded in early 2020 to respond to the isolation seen among residents.

LSC Service Corporation owns or manages six affordable housing complexes in the Cleveland area. All but 21 of its 1,034 units are federally subsidized. The organization also operates two senior centers: The Barton Senior Center, founded in 1964, is located in LSC’s oldest building, The Westerly, which was the first HUD 202 in Ohio. Another building, the Knickerbocker, is home to the West Shore Senior Center.

Simply Virtual is a nonprofit founded in 2020 by Tom Hlavin, who was moved by the plight of low-income older adults suffering isolation and stress while sheltering in their apartments during the pandemic.

Before the pandemic, Hlavin was community relations manager for Oak Street Health, a national primary care practice serving Medicare recipients, and would occasionally visit the Barton Senior Center, along with other housing communities on the west side of Cleveland.

During the pandemic, he says, “I still kept in touch with the service coordinators and the social workers, all of whom told me that they could see the isolation, depression, the loneliness, the quarantine, and literally the physical decline of the [residents].”

Hlavin wanted to help, and investigated existing programs that might help supply devices to residents, but realized they would take too long to implement. Describing himself as a “ready, fire, aim kind of guy,” Hlavin decided to just buy a few Amazon Fire tablets on his own and give them to residents. With the help of Cheryl Shaver, at that time the director of the Barton Center, “We got four people to sign up,” Hlavin says. “Those four people took them back to their apartments, and then we had eight people, and then 16, and then 32, and so on.” Hlavin also paid for installation of some hotspots in LSC’s Westerly building, which previously had Wi-Fi only on the first floor at the Barton Center.

To date, Simply Virtual has distributed about 450 tablets with the Android operating system to residents at LSC-managed properties. Hlavin and his staff of three sign up participants with the help of the service coordinators, who are all licensed social workers. Simply Virtual has succeeded in getting grant funding from the Cleveland Foundation and other sources along with in-kind donations. For instance, T-Mobile has supplied discounted devices (Moxee Tablets) and discounted internet access. Hlavin estimates that it costs about $190, which Simply Virtual covers, to give each resident a tablet, one year of internet access, and the set-up of the device (which is then the resident’s to keep). Devices typically include email, Facebook, Duo, Zoom for telemedicine, and more.

The nonprofit offers an in-person help desk service: Two Simply Virtual “navigators” visit a site for two hours at a time, helping residents or clients get set up and answering whatever questions they have. As people gain proficiency with their devices, the navigators will help them install additional apps as needed. Hlavin thinks the one-on-one help desk model is the best way to teach older adults how to use their technology, and will help such efforts grow rapidly. Simply Virtual has done help desks at more than 30 sites so far, and is rapidly expanding its efforts to help low-income older adults in partnership with the City of Cleveland, community organizations, and businesses. For more on Simply Virtual, see the cover story about Hlavin in Northeast Ohio Boomer and Beyond magazine.

Donnald Heckelmoser, LSC CEO/President, says four of his organization’s six buildings have been served so far and is optimistic that all residents will soon have the chance to participate in Simply Virtual’s program.

“The technology is so inexpensive, for a $30-$40,000 grant you can do a lot,” he says. Heckelmoser also says he gets great satisfaction from seeing his residents learn to connect with the world via technology: “Some of the residents will say, ‘Hey, I don’t want that junk.’ And then, a week or two later after they see people walking around with them and doing so many things with them, a lot of people are changing their minds.”

For more on the importance of broadband and digital technology for older adults, see this LeadingAge CAST article on the Johns Hopkins/AASC survey, which highlights the positive role that access to devices and good broadband internet can play in elders’ lives. Other LeadingAge resources include: 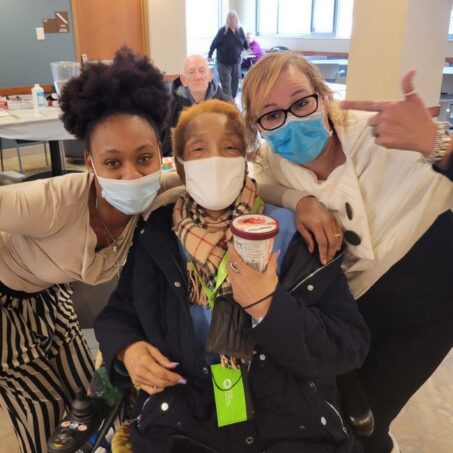