‘A Special Kind of Heart and Passion’: Florida Providers Cope With Hurricane Ian

Hurricane Ian, a Category 4 storm, made landfall on the Gulf Coast of Florida the afternoon of Sept. 28, and over the next 26 hours, slowly moved northeast, devastating a wide swath of the state before reaching the Atlantic.

Affordable housing, skilled nursing, and retirement communities across Florida suffered damage from wind, rain, and flooding, plus harm from water and power outages. Especially hard-hit were communities in Lee County, which includes the Ft. Myers/Cape Coral area, in the center of Ian’s path. That county bore the worst of the damage and accounted for at least half of the state’s fatalities, now numbering at least 127. Rough estimates of the damage it left behind range from $50-$75 billion.

While some older adults living in affordable housing, nursing, and retirement communities evacuated ahead of the hurricane, many found themselves sheltering in place. Providers put emergency preparedness plans into action, found temporary shelter for evacuated residents using reciprocal agreements with other providers, kept in touch with families via social media, and received help from colleagues in other organizations.

Riding Out the Storm and Starting Recovery

Two Volunteers of America (VOA) communities found themselves in the direct path of the hurricane.

Gulf Coast village, a CCRC in Cape Coral, suffered damage to the facade of its six-story building, including loss of some balconies, says Ann Walsh, VOA’s regional vice president of healthcare operations for southwest Florida. “We had two areas where apartments are actually exposed to the elements,” she says. “And we had metal carports that collapsed and fell on cars.” Three air conditioning units were destroyed. While the community was able to rely on backup generators, power and water were out for days and have only recently been restored. More than 300 Gulf Coast Village residents and many staff members–and their families–rode out the storm in interior areas, and there were no injuries. Fortunately, there was no storm surge flooding either VOA site. The organization drew on its own stored hurricane supplies, and its food vendors were able to resume deliveries within a few days. In the aftermath, however, four residents had to be moved to new apartments due to damage to their units.

In Ft. Myers, another VOA community, The Preserve Assisted Living & Memory Care, suffered much less damage, and in fact was able to shelter 22 residents, along with staff, from another community under a standing reciprocal agreement.

Walsh says that apart from damage at the communities, many staff took personal losses. The community is now compiling a list of all of the needs of staff, some of whom lost their homes, while many other employees had significant damage to their homes.

Another LeadingAge member in Ft. Myers did not escape the storm surge. Cypress Cove, a CCRC that is home to more than 500 residents, had to evacuate 121 residents from skilled nursing, assisted living, and memory care to the Lee Health Regional Cancer Center the day before Ian hit. Independent living residents stayed on campus. According to Executive Director Mary Franklin, the entire first floor of the building ended up with three to five inches of water. First-floor independent living residents, plus staff staying on site, were evacuated to the second floor, where most were taken in by other residents, apart from a few who preferred to sleep in the hallways. Both elevators went out of service and power was out for two days.

The day after the storm, staff went to work helping residents get supplies and taking them to a next-door “insurance camp” to begin filing claims. Staff began to deliver two meals per day to all residents; meals were also made for staff to take home for their families. Water from an indoor pool was distributed throughout the building for flushing toilets.

When the storm passed, it was discovered that all of the residents’ and staff’s vehicles, including two buses, had been flooded. Cotton Global Disaster Solutions, Cypress Cove’s restoration contractor, went to work immediately (with help from staff), removing soaked carpet from the building and assessing the damage.

South Port Square, a life plan community managed by LCS in Port Charlotte, received significant damage from the hurricane, but no injuries, since residents had been moved into hallways, with staff assigned for each floor, says Sherry Robinson, VP and director of operations management for Life Plan Peak Communities. There was a lot of broken glass in common areas of the buildings, along with damaged balconies and sliding outer doors in some apartments, which forced relocation of 10 residents (out of more than 700 on campus) to model suites or guest suites until repairs are completed. All apartments are being “moisture mapped” by BlueTeam, South Port Square’s restoration contractor, to determine where flooring or drywall has to be replaced. “I would not be surprised if it takes us a year to recover,” Robinson says.

Staff who have lost their homes or suffered significant damage are now living on the South Port campus, along with their families and pets. Robinson believes at least six to eight employees will need to house on campus for some time.

LCS communities in the Tampa area, originally thought to be in Ian’s direct path, have delivered the supplies they had gathered: food, mattresses, bedding, and more. South Port Square uses “A-team” and “B-team” designations to organize staff during emergency situations; the A-team (which includes department heads) rode out the storm on campus along with their families and pets, and then the B-team came on afterwards in relief.

Six HUD affordable housing communities managed by SPM in Lee and Sarasota counties suffered storm damage to roofs, along with power and water outages, but avoided any injuries to residents or staff. SPM Regional Property Manager Gary Bailey is grateful that none of the buildings, home to 200 residents in total, experienced a storm surge. Like other providers, SPM’s employees suffered their own losses. Bailey says four property managers and one member of the maintenance staff suffered significant damage to their own homes.

Bailey was particularly concerned about residents losing power immediately after the storm, especially those using oxygen pumps. He was able to reach the offices of Florida’s U.S. Sens. Marco Rubio and Rick Scott, which he says resulted in power restoration within two hours.

“I’m very appreciative to them and a lot of the agencies and local churches that stepped up to supply meals for our residents,” he adds. “Our managers were at the properties cooking hot meals for the residents until the Salvation Army and Red Cross were able to step in. I would say one of our biggest needs is just replenishing groceries for a lot of our residents who have lost food in their refrigerators.”

In Sarasota, Sunnyside Village was spared the worst of the hurricane, but as the storm’s predicted path changed before landfall, its leaders knew they would be able to help others. The community welcomed 35 memory care residents and 12 staff from Plymouth Harbor, a life plan community on Sarasota Bay, which evacuated all of its residents to three different locations.

“Our peer communities rallied together and figured out how we can get everyone transported and fed,” says Alex Maliwacki, Sunnyside Village’s director of health services. “It was really eye-opening, the number of people that were calling in the days leading up to the storm as the track changed so drastically … places desperately needing to evacuate really quickly.”

A few vacant apartments in the assisted living center were available for evacuees, but many other areas were pressed into service as needed: “Activity areas, the lobby, the ice cream parlor, anywhere we had space,” Maliwacki says.

“It was really a sight to see,” she continues. “We were under an extreme wind warning for about six hours. We had the residents from all our levels of care plus the Plymouth Harbor residents in the hallway and playing games. They were batting balloons up and down the hallway … it brought tears to see, but everyone was just doing the best they could to keep people comfortable in a very uncomfortable situation.”

Staff from the two communities worked together to meet residents’ needs, merging their food supplies and preparation staff to cook meals for residents and all employees for the two days before the Plymouth Harbor residents could go home.

“I think the staff feels something like survivor’s guilt,” Maliwacki says. “And we were better prepared [for the storm] because it was supposed to hit us. And then when it hit south of here, we were pretty desperate to find ways to help support them.” Sunnyside Village organized a blood drive a couple of days after the storm, and delivered loads of food to Cypress Cove.

“The work that [our] staff have been doing has been truly remarkable,” Robinson says. “There are no words to describe what these employees have been through and what they have accomplished. They have worked without stopping for days. Many have not been able to return home. Many slept on the floor in the community. They have lost their homes, their cars, and are separated from their families. But these same employees are the ones who are at work, smiling, serving, providing care, and boosting up the residents. People working in senior living have a special kind of heart and passion for what they do. They have dedicated their lives to the residents they serve, and are examples of the excellence of care and service that LeadingAge supported communities are known for.”

Franklin lauds the strength of Cypress Cove staff, working despite their own losses and helping residents recover. “I’ll try not to get emotional, but our team members … I would go to war with them over and over again,” she says. “We had everyone from 16-year-old dietary staff and servers up to experienced people who’ve been here forever [helping]. They all just got in line and did what we needed to do. We had no loss of life, but we do have a handful of employees, five or six of them, that have lost everything they own. Some had damage to their homes but there they were, the next day.” Franklin says employees have gathered items from their own homes to donate to other staff or residents and their families.

The LeadingAge Disaster Relief Fund is actively collecting funds to help members offset costs associated with damage from Hurricane Ian. All donations are tax-deductible, and 100% of all donations go directly to member organizations and their staff to cover a range of needs, including basic supplies such as food and water. To date, over $38,000 has been raised. Donate today. 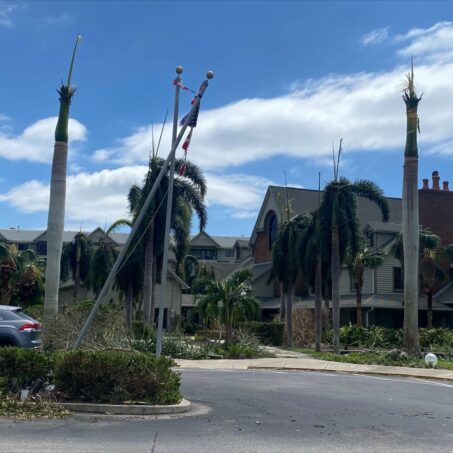