Hard Choices in Search of a Living Wage for Staff

Despite inadequate reimbursement and in the face of severe workforce shortages, LeadingAge members are working to increase compensation for the direct-care workers that they rely on.

To better understand how and why direct care work remains undervalued and poorly compensated, start by downloading Making Care Work Pay from the LeadingAge LTSS Center @UMass Boston. This in-depth report outlines the tremendous negative effects of the current system and explains why raising pay so all direct care workers earn a living wage would result in better care, a more professionalized workforce, and a better economy.

Here is a look at what two members are doing to boost wages and benefits—one a large, complex, multi-state provider, the other a single-site life plan community.

Ohio-based National Church Residences, which operates 340 senior housing communities in 25 states and employs more than 2,500 workers, has been on a path to offer a living wage to employees for more than five years. In April 2021, it reached its aspirational goal of a $14.50 hourly wage minimum for all employees, including direct-care workers (such as CNAs).

Danielle Willis, senior vice-president of employee engagement and chief diversity officer, traces the organization’s effort back to 2015, and recalls a conversation she had with President & CEO Mark Ricketts.

“He came to my office one evening, and we were talking about staffing and turnover, and he talked about employees who work for us full time, yet still bring home poverty wages,” Willis says. “And so, the question was, are we just perpetuating the problem that we are trying to solve?”

The move to $14.50 directly affects about 800 employees, Willis says. The greatest challenge, she says, is inadequate Medicaid reimbursement that makes it harder to raise wages. Another is that different places offer different costs of living, so the market competitiveness of that rate can vary with the location of the community.

Willis says that positions haven’t been eliminated, but the increased wages can create a challenge for some service lines—particularly those delivered via Ohio’s PASSPORT Medicaid waiver program, which provides home and community-based services. For those clients, she says, “When we put an aide in a car to go provide care, we lose money. We did not stop providing that service, but we knew that we needed to increase our caseload in other ways, to subsidize [the cost of that care].”

NCR’s approach to improving workers’ compensation has evolved since the program’s launch. While boosting hourly wages is valuable to workers, improving other benefits is also valuable in employee recruitment and retention. One concern has been employees’ ability to save for retirement. NCR offers staff a 403(b) plan that features auto-enrollment—workers must choose to opt out if they don’t want to participate—and a base contribution to all accounts in addition to an employer match.

“Even if the employee isn’t choosing to contribute anything, they’re still getting the match plus the original base,” Willis says. “We want them to begin to prepare for their retirement.” Less than two percent of employees opt out.

Other staff retention initiatives include the creation of career ladders and increased tuition reimbursement. With the National Center for Urban Solutions (NCUS), National Church Residences is bringing a State Tested Nurse Aide (STNA) academy to its campuses, with no cost for employees who enroll. NCUS operates its own “Career-Based Intervention” School, The Academy for Urban Scholars (AUS), that is part of the state’s CBI program. That program, created by the Ohio Department of Education, is designed to help students “improve academic competency, develop professional skills, and implement a career plan.” It combines in-class educational and on-site experiential learning opportunities for students ages in grades 7-12, “who are identified as disadvantaged (either academically, economically, or both) and/or students with disabilities, who have barriers to achieving academic and career success.”

Staff surveys revealed a strong desire for greater choice in health plans, which has been implemented as part of the program. Health savings accounts (HSAs), with an automatic contribution for staff who choose them, are now available. Dental benefits have increased, and a vision plan and a care navigation service have been added as well. Various forms of leave (e.g., vacation or sick leave) have been rolled into a single “PTO bucket,” according to Willis.

Measuring the outcomes of the organization’s living wage effort is tricky. The COVID pandemic and associated changes in workforce demands, not to mention the increased options that some LTSS workers now have, complicate evaluation. For those positions that benefited from the living wage work, Willis looks at turnover, retention, and engagement scores. “We are able to see a correlation—I won’t necessarily say causality—but a correlation between […] our work around the living wage for those impacted positions, and turnover, retention, and engagement.”

“Focusing Dollars Where They Do the Most Good”

The benchmarks Edenwald is using are supplied by PayScale, a compensation and benefits firm used by a number of other Maryland providers, along with other wage studies.

Beggs says the higher wages have improved Edenwald’s ability to recruit staff. He also believes the organization’s location in a densely populated Baltimore suburb with good public transportation makes a difference as well.

The initial wage hikes will have to be supplemented by more, Beggs believes. “We’re going to move a lot of positions that have been in the 75th percentile to the 90th percentile,” he says, including geriatric nursing assistants (GNAs), security staff, and more.

“I see us doing that with a lot of these positions,” he adds. “[We’re] not competing against another housekeeping job or another security job, we can lose people to Amazon.”

Another issue is related to a group of long-time employees who have already reached the top of the pay scale. Edenwald is capping those positions but giving them raises in the form of wage cap bonuses.

Employees are auto-enrolled in the organization’s 401(k) plan, with a five percent match. A change in the timing of eligibility has made a big difference.

“You used to have to be here for a full year before you were put into [the retirement plan],” says Beggs. “By the time [staff] were here a year and we would approach them, many of them just wouldn’t follow through on it. So, we changed it to mirror our benefit structure. After your first 60 days, you’re automatically enrolled in the 401(k) on the first of the next month. Participation has gone up dramatically.”

Raising wages hasn’t been easy, Beggs says, “but it is something that we are committed to. Though Edenwald has a large endowment, it has historically struggled from an operational perspective, funding day-to-day operations with investment monies instead of self-supporting with monthly service fees. Over the last three years we have had to make different choices to right our operations and to make this necessary pay adjustment possible and workable. We have had to shift our operational model, focus our dollars where they do the most good for our residents, and even change the inventory mix of the community.

Beggs says Edenwald is still finalizing its 2022 budget and estimates the wage impact will raise costs by nearly $900,000: “But we’re going to make the shift and, as of today, we’re still moving forward.”

How is your organization increasing wages and benefits to attract and retain direct-care workers? The LeadingAge Story Collector, powered by Greystone, makes it easy to submit your story. Try it now. 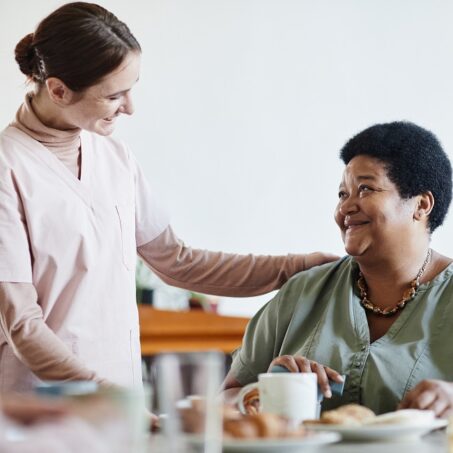