This New York member was called on to help support an overwhelmed regional health care system. It succeeded, while integrating National Guard troops in its work.

Nonprofit aging services providers exist to serve older adults, first and foremost. But they also play a valuable role–too seldom acknowledged–in the larger health care system, helping it more effectively serve local communities, or even an entire state. One example of a provider in our sector stepping forward to provide critical support involved Loretto, a full-continuum, multi-site LeadingAge member based in Syracuse, NY.

Coming to the Aid of Regional Hospitals

The story began in December 2020, when local hospitals in Onondaga County, including a level-one trauma center, were overwhelmed with COVID-19 cases.

“Our county was in the red zone, which in New York state at that point meant the county was on the verge of being shut down [to new patients] for a second time in a short period of time,” says Loretto President & CEO Kimberly Townsend. In collaboration with the New York State Department of Health, Onondaga County, and the State University of New York Upstate Medical Center, Loretto was the first organization in the state to open a COVID transition community, charged with treating COVID-positive patients in a lower acuity setting than a hospital.

The first step was moving 144 residents from one Loretto nursing home to other Loretto communities and then preparing the building to serve stable COVID patients who could be transferred from hospitals. Over the first two months, 268 such patients were transferred to Loretto from hospitals in a 10-county region. Of that group, Townsend says, 254 fully recovered and were discharged to home. Since then, Loretto has opened the COVID units four additional times. In total, Loretto has served 369 patients, 350 of whom fully recovered. Of the latter group, 130 went from the transition center to short-term rehabilitation before being discharged to home, and 49 ultimately needed long-term care.

In December 2021, when central New York had the highest positivity rate in the state, Loretto was again asked by state authorities to help reduce the pressure on the region’s hospitals by taking on COVID-19 patients. This time, National Guard troops deployed by New York Gov. Kathy Hochul arrived at Loretto to help. In contrast to many of the National Guard deployments to nursing homes in New York and other states nationwide, the 18 members who arrived at Loretto in early December were tapped not to address long-term care specific staffing challenges, but rather to support an under-resourced system.

“Our National Guard troops were deployed to meet the needs of the health care system in this region–to decant the hospitals of COVID positive patients,” says Townsend. “But the media coverage we received was slanted [toward] ‘Governor deploys National Guard troops to meet staffing crisis in long-term care facilities.’ And so of course, that was very upsetting for our residents, and upsetting for our staff, as well as our family members.”

To remedy that misperception, Loretto implemented a proactive communication plan to ensure residents, families, staff, and the troops themselves understood Loretto’s role. “We shared with [the troops] that our community and regional health care network was breaking down, and our level-one trauma center was to the point where it could not accept patients,” says Julie Sheedy, Loretto’s chief marketing and engagement officer. “And by putting that in context, it really gave the troops a sense of mission and purpose.”

To the staff union’s concern that non-union employees were being brought in, Loretto explained that the troops were sent not at Loretto’s request, but at the request of the New York State Department of Health (NYSDOH).

“I think our approach [to news media] made it more of a non-story,” Sheedy says. “Our active engagement with the media throughout COVID, and our transparency and responsiveness, earned us credibility. When we were asked questions by reporters, there were a number of inquiries that didn’t even result in stories, as we explained why we were asked by the governor’s office to do this service.”

Integrating the National Guard Into Operations

All the National Guard members had received some basic EMT training or were EMT-certified, so each group immediately began with a Fast Track Certified Nursing Assistant (CNA) Training, a NYSDOH program. The Fast Track program allowed Loretto to customize and speed up its existing program. The training for the troops lasted two days and was administered by Loretto’s education department under the oversight of its chief nursing officer.

The National Guard members were then assigned to shadow and assist CNAs for two to three days, receiving orientation on several units during the day shift. After that, the troops spent the next two weeks focused on short-term rehabilitation, an area with high patient turnover, during the evening shift. Later, Loretto deployed the troops in two teams to support both short-term rehabilitation and long-term care.

Working with the commanding officer, Loretto implemented a buddy system, as is often done in the military. Pairing members together promotes effectiveness and greater accountability. Loretto also coordinated schedules so that the troops could break for meals together as much as possible.

Three-fourths of the troops were Army medics and needed to travel on weekends for drill training. Loretto accommodated this, as well as time off requests.

The National Guard provided for its members’ basic needs: housing for those who were not local, plus meals. Loretto provided to-go bags with water, snacks, and Loretto gear, as it had provided emergency food bank bags to its own employees during the pandemic. Employee coaches also tried to assist troops as needed during the deployment, particularly over a holiday period.

During rounds, Loretto’s supervisors checked in with the National Guard members to ensure they had everything they needed to fulfill their roles. The commanding officer also had the troops complete daily shift reports, which allowed Loretto to get timely feedback from their shift experiences. The deployment ended May 31, by which time there were 51 National Guard members serving across the Loretto system.

“We have a very sophisticated educational organization within Loretto, a set of long-standing programs that we continue to add to. And so it was from this level of experience that we were able to rapidly train our National Guard troops and deploy them on the floors,” says Townsend, who notes that several of the troops expressed interest in going into long-term care as a career.

For the National Guard members, this assignment was a mandatory activation. “The shift from monthly drills to being deployed to care for older adults made it important to consider their perspective and communicate a mission-based focus,” says Townsend, “so they could understand how their deployment was providing essential support and relief within a bigger picture.”

She adds that the troops did not blend in, since they are required to wear fatigues. Some residents also found the uniforms intimidating. Over time, the troops went from full fatigues to scrub tops and fatigue bottoms, eventually wearing full scrubs and soft shoes, all of which had to be military-issue.

“There was an initial feeling of shock [among them], as many did not know they were coming here until their arrival,” says Townsend. “However, they were more than willing to jump in, learn, and contribute, which is precisely what they did.”

For a closer look at how National Guard troops were integrated into Loretto’s skilled nursing operations, see Loretto’s National Guard Success Story page, which includes a link to a detailed case study by Kimberly Townsend.

This story was submitted to the LeadingAge Story Collector, powered by Greystone. Submit your story now! 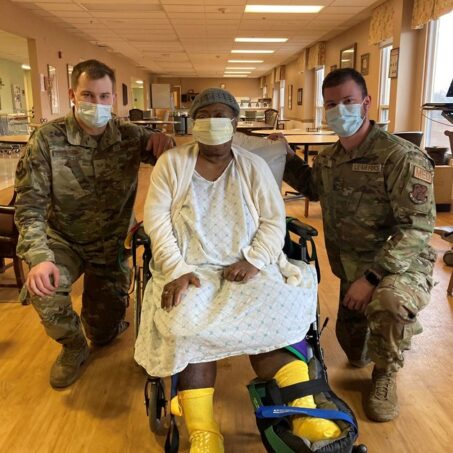